First month of spring has come to its end and it’s hightime to select the best offline poker player of the month relying on  the results of the biggest latest poker series.

THE BIGGEST AND MOST PRESTIGIOUS POKER SERIES IN MARCH:

Two of them are historical:  SHRB was first held outside Las Vegas,  and also  EPT came back after one-year break resuscitating in Sochi.

Each of these series had its heroes who tried to claim the title of the player of March.

The fact that WSOP Circuit in LA had only 26 tournaments in its schedule and has taken the whole month (from the 2nd till the 31st). Surprisingly, the biggest prize pool was played during the 160$ buy-in tournament  (neither Main Event nor high roller).

Tournament Mega Millions XVIII Quantum Reload Event (#25) had guaranteed prize fund of one million dollars. It had 6,087 entries which made the prize twice bigger. Such a big field was beaten  by the Canadian player - Alan Engel. 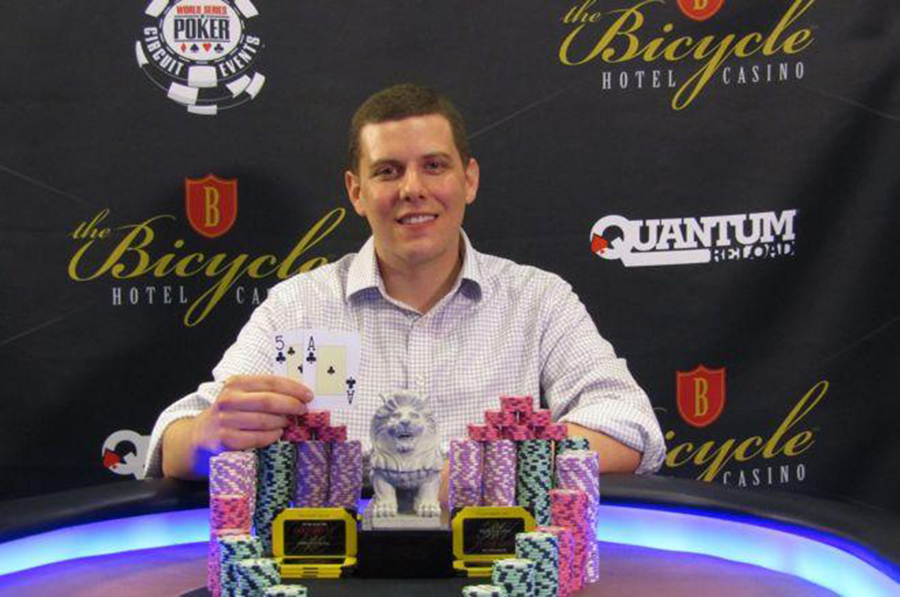 Son of a rabbi from Toronto (that explains him wearing skullcap at the table) won $315,142. His main achievement is not in the absolute numbers, but in relation with the buy-in of the tournament. he has beaten 1,970 entries.
For comparison – the latest The Colossus with the buy-in of $565 received a million dollars, and that is just 1,770 entries, while Scott Blumstein had only 870 buy-in at WSOP Main Event.

WSOP international Circuit in Rozvadov carried on the tradition of  last year’s local WSOP that took place here.  The main Event was won by an absolutely unknown guy from Bosnia – Amar Begovic. It was his first $16,000 + offline winning since 2009. $271,525 and WSOP Circuit Bracelet made him the main poker “Cinderella” in March. The second stage of Asia Poker Stars series - Asia Pacific Poker Tour (APPT) was primarily interesting with its high roller tournaments.  At winter stage only one tournament was won by not a local (Nikita Bodyakovski), but this time both tournaments were won by North American players.

Peculiarity of the situation is that High Roller (Event #2) was won by Kristen Bicknell, who has  become the first APPT female winner at APPT , and Super High Roller Event #6) was won by her boyfriend William Foxen.  The sweet couple took 1,200,000 dollars from Macau. By the way William’s $963,880 became the second in size in this month. First EPT stage after the break took place in Russia without a big number of western professionals. Regular CIS poker players were more than happy with this. First tournaments of the series were won by the representatives from the Netherlands and Czech Republic, the following eight tournaments were taken by Russians and a Belarusian player.

Main Event included the prize which is the equivalent of $2,561,745. Sihao Jang was the “the last of mohicanz” (the only non-CIS player at top-16 rate). He kicked off with the second place in chips and in result finished 16th.

“The magician” of the final table was Arseniy Karmatski. Well, he was the most known player at the table but his win was possible largely due to great luck.

In Top-4 Arseny won another all-in against Viktor Shegai – JJ vs AK. Viktor caught a pair of aces during the flop before a  jack dropped at the river.

Negative reaction of the hand was called by emotional commentaries of Karmatski in regards of his opponent’s call. Everyone agreed upon the fact it’s impolite to teach opponent during the game. Arseniy Karmatski won this tournament and earned $478,451. He is 100% the luckiest player of March.

Despite a big number of poker curiosities that happened in March 2018, their heroes can’t be called the best player. The author of the biggest win in March is Justin Bonomo.

32 year- old American is one of the best US players nowadays. In addition to his excellent results ( he had over $20,000,000 in winnings before March), he managed to become the participant of  several scandalous stories.

Justin started to play poker online. He never waited to be 21. Obviously he got banned (an under-age player ban).  That’s why thousands of dollars he won remained at his accounts at various poker rooms.

After turning 21, Bonomo never stopped to break the rules of online rooms. It turned out that he had several accounts in PokerStars and partypoker. After a long pause and lots of exuses he was finally allowed to play in those rooms. That fact didn’t stop him from showing displease at PokerStars policy 10 years later.

He went to EPT Grand Final in Monte-Carlo (organized by PokerStars) and claimed  he won’t allow neither interviewing nortaking a single photo with him. When Justin entered the main TV table all he was talking about was criticizing PokerStars.

After winning  one of the tournaments at the series  he only agreed to make a photo only with a sign that told “They say they won’t pay me if I don’t take this photo. SuperNova Elite: PokerStars stole $50,000 from me.” As a result the administration of the tournament had to refuse the photo session despite the fact that any player automatically agrees on it while taking part in the tournament.

At Super High Roller Bowl China Justin Bonomo showed his best poker skills only. There were not any reasons for conflicts for him. Almost all the poker elite professionals were invited to that elite event. 49 persons were struggling for their share of the prize fund of $18,550,297 prize.

The fact that Phil Ivey got kicked during the first day (even not trying to make re-entry on the second day) and Fedor Holz didn’t get to prize zone after 6 entries (!), says a lot about tough and intensive performance at SHRB.

That was the tournament Justin Bonobo managed to win. He has beaten a representative of “old school” - Patrick Antonius, who made his return to the game after a 4-year break in live tournaments.

Justin received $4,823,077 for winning the tournament. This is the biggest win in his career that lifted him up to the sixth position in world rating in the total amount won.

That’s why PokerDiscover declares Justin Bonomo the best poker player in March. We can also call him the best player of Q I 2018. He has won the biggest amount in the world, over seven million dollars during this period – more than any other player this year.